Components of a Trusted Platform Module complying with the TPM version 1.2 standard

Trusted Platform Module (TPM) is an international standard for a secure cryptoprocessor, which is a dedicated microcontroller designed to secure hardware by integrating cryptographic keys into devices. TPM's technical specification was written by a computer industry consortium called Trusted Computing Group (TCG). International Organization for Standardization (ISO) and International Electrotechnical Commission (IEC) standardized the specification as ISO/IEC 11889 in 2009.[1]

Trusted Platform Module offers facilities for the secure generation of cryptographic keys, and limitation of their use, in addition to a random number generator.[4][5] It also includes capabilities such as remote attestation and sealed storage, as follows:

Software can use a Trusted Platform Module to authenticate hardware devices. Since each TPM chip has a unique and secret RSA key burned in as it is produced, it is capable of performing platform authentication.

Generally, pushing the security down to the hardware level in conjunction with software provides more protection than a software-only solution.[8] However even where a TPM is used, a key would still be vulnerable while a software application that has obtained it from TPM is using it to perform encryption/decryption operations, as has been illustrated in the case of a cold boot attack. This problem is eliminated if key(s) used in TPM are not accessible on a bus or to external programs and all encryption/decryption is done in TPM.[citation needed]

The United States Department of Defense (DoD) specifies that "new computer assets (e.g., server, desktop, laptop, thin client, tablet, smartphone, personal digital assistant, mobile phone) procured to support DoD will include a TPM version 1.2 or higher where required by DISA STIGs and where such technology is available." The TPM is anticipated to be used for device identification, authentication, encryption, measurement, and device integrity.[9]

An example of use is Intel's Trusted Execution Technology (TXT). Intel's TXT is used to create a "chain of trust", and to remotely attest that a computer has a specified hardware setup and is using specified software.[10]

The primary scope of a TPM (in combination with other TCG implementations) is to assure the integrity of a platform. In this context "integrity" means "behave as intended", and a "platform" is generically any computer platform – not limited to PCs or a particular operating system: start the power-on boot process from a trusted condition and extend this trust until the operating system has fully booted and applications are running.

Together with UEFI, TPM forms a "root of trust": TPM contains several PCRs (Platform Configuration Registers) that allow a secure storage and reporting of security relevant metrics. These metrics can be used to detect changes to previous configurations and derive decisions how to proceed. Good examples can be found in Linux Unified Key Setup (LUKS),[11] and in Microsoft's BitLocker Drive Encryption and PrivateCore vCage memory encryption (see below).

Therefore, the BIOS and the operating system have the primary responsibility to utilize TPM in order to assure platform integrity. Only then can applications and users running on that platform rely on its security characteristics, such as secure I/O "what you see is what you get", uncompromised keyboard entries, memory and storage operations.

Full disk encryption applications, such as SecureDoc, dm-crypt in modern Linux kernels, and BitLocker Drive Encryption in some versions of Microsoft Windows, can use this technology to protect the keys used to encrypt the computer's hard disks and provide integrity authentication for a trusted boot pathway (for example BIOS, boot sector, etc.) A number of third-party full-disk encryption products also support TPM.

Access to keys, data or systems is often protected and requires authentication by presenting a password. If the authentication mechanism is implemented in software only, the access typically is prone to "dictionary attacks". Since TPM is implemented in a dedicated hardware module, a dictionary attack prevention mechanism was built in, which effectively protects against guessing or automated dictionary attacks, while still allowing the user a sufficient and reasonable number of tries. With this hardware based dictionary attack prevention, the user can opt for shorter or weaker passwords which are more memorable. Without this level of protection, only passwords with high complexity would provide sufficient protection.

Other uses and concerns

Almost any encryption-enabled application can, in theory, make use of a TPM, including:

Other uses exist, some of which give rise to privacy concerns. The "physical presence" feature of TPM addresses some of these concerns by requiring BIOS-level confirmation for operations such as activating, deactivating, clearing or changing ownership of TPM by someone who is physically present at the console of the machine.[13][14] 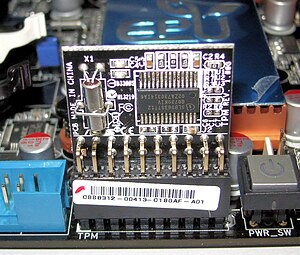 Starting in 2006, many new laptop computers have been sold with a built-in Trusted Platform Module chip. In the future, this concept could be co-located on an existing motherboard chip in computers, or any other device where the TPM facilities could be employed, such as a cell phone. On a PC, either the LPC bus or the SPI bus is used to connect to the TPM.

There are five different types of TPM 2.0 implementations: discrete TPMs (dTPM), integrated TPMs, firmware TPMs (fTPM), software TPMs, and virtual TPMs.[17][18] Discrete TPMs are chips that implement TPM functionality and nothing else, and are in their own semiconductor package.[17] These implement their functions in hardware to resist software bugs and implement tamper resistance.[18] They are therefore the most secure type of TPM.[18] Integrated TPMs are part of another chip that implements other functionalities.[17] While they use hardware that resists software bugs, they are not required to implement tamper resistance.[18] Intel has integrated TPMs in some of its chipsets.[17] Firmware TPMs are software-only solutions that run in a CPU's trusted execution environment.[18] Firmware TPMs are dependent on the trusted execution environments that they run within for security beyond what the normal execution environment provides.[18] Since these TPMs are entirely software solutions, these TPMs are vulnerable to software bugs within themselves.[18] AMD and Qualcomm have implemented firmware TPMs.[17] Software TPMs are software emulators of TPMs that run with no more protection than a regular program gets within an operating system.[18] They depend entirely on the environment that they run in, so they provide no more security than what can be provided by the normal execution environment, and they are vulnerable to their own software bugs.[18] They are useful for development purposes.[18] Virtual TPMs are provided by a hypervisor.[18] These are therefore reliant on the hypervisor for security beyond the execution environment provided to the software running inside the virtual machine and therefore provides a security level similar to a firmware TPM.[18]

While TPM 2.0 addresses many of the same use cases and has similar features, the details are different. TPM 2.0 is not backward compatible to TPM 1.2.[19]

TCG has faced resistance to the deployment of this technology in some areas, where some authors see possible uses not specifically related to Trusted Computing, which may raise privacy concerns. The concerns include the abuse of remote validation of software (where the manufacturerTemplate:Mdashband not the user who owns the computer systemTemplate:Mdashbdecides what software is allowed to run) and possible ways to follow actions taken by the user being recorded in a database, in a manner that is completely undetectable to the user.[34]

Another limitation raised by TrueCrypt developers is that a TPM cannot be relied upon for security, because if the attacker has physical or administrative access to a computer and you use it afterwards, the computer could have been modified by the attacker: e.g., a malicious component—such as a hardware keystroke logger—could have been used to capture the password or other sensitive information. Since the TPM does not prevent an attacker from maliciously modifying a computer, VeraCrypt (a successor to TrueCrypt) will not support TPM.[35]

The private endorsement key is fundamental to the security of the TPM circuit, and is never made available to the end-user. this private key must be known to the hardware chip manufacturer at manufacture time, otherwise they would not be able to burn the key into the circuit. There are no guarantees that this private key is not kept by the manufacturer or shared with government agencies. Anyone with access to the private endorsement key would be able to forge the chips identity and break some of the security that the chip provides. Thus, the security of the TPM relies entirely on the manufacturer and the authorities in the country where the hardware is produced.

TPM is implemented by several vendors:

There are also hybrid types; for example, TPM can be integrated into an Ethernet controller, thus eliminating the need for a separate motherboard component.[54][55]